The weather was kind, and this was the best birding weekend for several years. Nearly all the rarities put in an appearance, but on top of that there was lots of action.

The Familiar Chat is normally an inoffensive little character that always identifies itself with a wing-flick. It eats tiny insects. But today it ambushed a large centipede. It obviously recognised it as dangerous, because a lengthy period of whacking it senseless followed.

A Cape Rock Thrush tackled another unlikely meal. It was cautiously poking at a large “worm” that turned out to be a tiny black snake about 15 cm long. We wanted to identify the snake, but the thrush would have none of it and swallowed it whole.

Cape White-eyes occasionally pirate red tubular flowers by cutting holes in the base of tubes – bypassing the pollen. But here was a large flock, 15 birds at least, gently probing Kiggelaria flowers. These are small, open, and pale yellow; perhaps tiny insects congregate there. Incidentally Cape White-eyes are only territorial in summer; flocks of even 100 may roam during winter.

Talking of piracy, the Cape Canary has a fancy for daisies. These disperse using dry, wind-borne parachutes, no need for bird assistance. But the canaries were pulling off the unripe fruits, eating them, embryo and all, while still juicy. 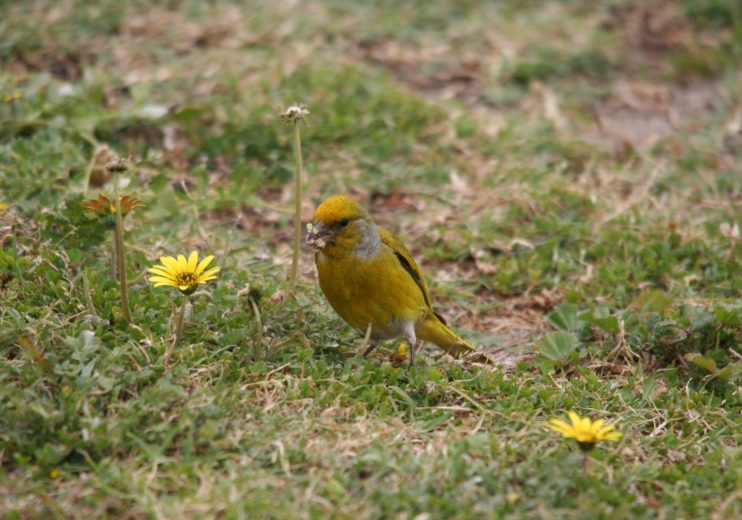 Walks through the Fern Forest tend to be quiet; the birds are there, but difficult to see. The Lemon Dove is one of the most elusive, so imagine two separate sightings on the same afternoon. The first sat obligingly on a low branch in the gloom – a better view than most. Shortly afterwards another remained perched, in the open, on a branch very near our path. It showed no concern as we walked to within a metre.

Darter dam gave us both Malachite and Half-collared Kingfishers within the same view. A few minutes later the resident Brown-hooded Kingfisher appeared. Its nest hole is right next to the water’s edge, although it has never yet been seen fishing.

Elsewhere in the garden were most of the usual subjects; Chorister Robins – that are usually considered forest interior denizens – are regular, but this time how about 20 separate individuals? The Bush Blackcap is occasional here, but four separate individuals is a record. 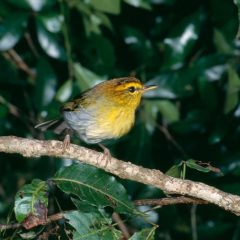 On the open hillsides there were good views of female-dress Red-collared Widowbirds and Yellow Bishops together, excellent comparison for those who normally shun LBJs. An Olive Woodpecker in an isolated acacia was a surprise, and in tiny bush clumps were the Yellow-throated Woodland-Warbler and Fairy Flycatcher.