The existence of so many paintings, representing an otherwise lost culture, is a matter of fortune. All of the Drakensberg paintings are on Cave Sandstone, a rock custom-built for the purpose. It erodes in a way that produces weatherproof overhangs – few are real caves. So the artist can work in peace, and his work will not be washed away by the first rain. The sandstone is porous so that paint applied will sink in and “grip”. Paint on a smooth surface would soon peel off.

The age of the paintings is open to speculation, but the newest are generally considered to be about 130 years old. The last recorded sighting of a Berg Bushman was in 1871. The amount of wear provides a rough index that can be applied to paintings in a poorer state of preservation and presumed older. Some of these might be 500 years old. Very likely the Drakensberg Bushmen and their art are much older than this however.

Like most art this has a distinctive style, perhaps combining the attitude of the artists and what was considered fashionable. Bushman art has great value as a picture book of the past. Because many of the pictures are of clearly recognisable subjects, we can place a lot of trust into other pictures. Nobody can doubt that this picture of a man on a horse, complete with rifle and Boer hat is a Voortrekker. So the clearly older picture of an Arab slave gang can only be based upon direct observation.

The Eland must have been the favourite animal of the Bushmen. Eland pictures outnumber those of all other animals put together. Something all the Eland pictures have in common is the exaggeration of those qualities so typical, its huge neck and shoulders. To emphasise the point the legs are made small and weedy. Nobody has dared say so, for fear of appearing irreverent, but these are the world’s first cartoons. This opinion does not lessen admiration for their quality. Notice how the work of one artist does not necessarily respect that of another. Best painting surfaces must have been at a premium, with rivalry over-riding any finer feelings. We tend to regard the Bushman artist as a sort of Neolithic van Gogh: was he instead a freelance public house doodler? Two other Berg antelopes are beautifully portrayed. This Red Hartebeest has the typical jaunty kink to the horns, and the Vaal Rhebok has its long ears and snout exaggerated just that little bit, surely to distinguish it from a Mountain Reedbuck. It is interesting to note an obvious absence from the menagerie. The Blesbok is never painted, evidence that it never occurred in the Berg. It is not obvious why not, for it is a highland dweller common not far away. But recent attempts to introduce it failed, the Bushmen had it right. The Black Wildebeest is not often painted, despite being common on the highveld not far away. The Roan Antelope, although absent from the Berg today features quite often, suggesting a recent local extinction.

Bushman paintings also illustrate several other animals not found in the Berg today. We have to believe that they were there. This perfect Elephant from Fulton’s Rock can only have been painted from life. It is true that the Bushmen were not (all) sedentary, and would have encountered Elephants on journeys to the lowlands. But it is more likely that they would paint what they could see, rather than something remembered – less than perfectly – from events past. The heavily built cat, so much more robust that the “pink panther” Leopard that Symons never saw, is surely a Lion. This Antbear is perfect. These white animals are often called Bushpigs by scholars, perhaps because they cannot bring themselves to believe that they are Rhinos. Rhinos have not always been confined to the lowlands, Paul Kruger once shot five in an afternoon on the highveld.

These animals were not necessarily resident, although we know that climatic change can be sudden, and conditions would have been more suitable for them a few hundred years ago. A little extra warmth would expand the range of termites up the mountains, giving the Antbear a living. The Elephant, Rhino and Lion, and several other species including the Roan Antelope, were most likely summer migrants from the lowlands. Grass quality and other forage in the Berg summer can support lots of animals. The trick is to get out before the winter famine sets in. The end of most of these animals in the Berg came with the extravagant hunting of big game by the colonials in the nineteenth century and their settling of the migration route. 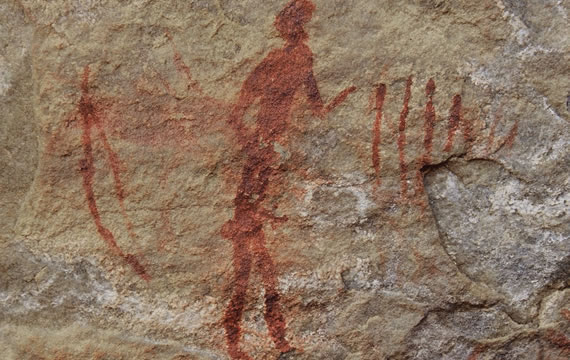 Plants are very rarely painted, even though, if other hunter-gatherer societies are a yardstick, they were probably at least half of the diet. Plants also provide painting materials, medicines, poisons and other commodities. Could it be that because finding plants was women’s work it was so unimportant as not to be worth a mention? Male chauvinism is the norm for most of recorded history.

Note that about half of the animal pictures face to the right. This implies that they were painted by a left-handed person. Such a proportion of left-handedness is very high. Modern research shows that artistic people are more likely to be left-handed than mere mortals, but nowhere near to the Bushman level. Were they a race of super-artists in which nearly everyone could paint well?

Most human scenes seem very real. In the battle scenes warriors are as dynamic as any ever portrayed, all speed and vigour. The scene must depict an attack upon the occupants of a cave, for there are women tending the wounded of the “home” side. The away side would not have such support. We can deduce that life was not all peace and harmony, man has always fought over the best things when they are in short supply, here evidently the rock shelter. The portrayal of the human figures shares a characteristic with the animal paintings – lifelike, but not exactly true to life. Distinctive features are emphasised. Here this means enlargement of the buttocks, the feature that most obviously distinguishes the Bushmen from other races. None of the paintings ever portrays the human face. This cannot be because it was too difficult a feat. Many other cultures believe that a portrait renders the subject vulnerable to harm, and perhaps that was the case here.

The materials used in the paints are all local. Blood, or rock or soil rich in ferric oxide (rust) provide reddish brown. Variations in redness can be obtained by heating the pigment in a fire. A very interesting aside is that the Lammergeyer “paints” its white breast by repeated contact with iron-rich rocks, and must do so after every moult. Charcoal provides black, while white is created with bird droppings or clay. Other colours are rare. The Bushmen weren’t that particular about matching colour to that of the live subject. Elephants tend to be painted red. The subtly different colours in life of some of the small antelopes are not addressed in the paintings, making some identifications difficult.

Less is known about the medium used to convert the pigment into usable paint. Melted fat beeswax or egg white work well, but the secret ingredient that gave permanence to the paintings is not known. Old eyewitnesses, long dead, claim the Bushmen used a brush of Black Wildebeest mane or tail attached to a reed; pointed bone was used for finer definition. We know from incomplete paintings that white was applied first, and additional colours, if any, were painted on top.

It is a great sadness that Bushmen art will not last forever. At least not in situ, where we can stand where the artist stood and feel his world around us. Natural deterioration is quite fast, and already some of the famous paintings are known only from photos or copies made when they were first discovered. Although the pigments used in the paintings are quite strong, and reasonably colour-fast, the rock faces slowly crumble. Missing pieces of paintings attest to this. Nor have the paintings been properly cared for since the departure of the Bushmen. In the early history of the reserve visitors were allowed to camp where they liked, and often built fires near the paintings. Some had the Victorian attitude of scorn towards alien art, especially “primitive” pictures of naked people, and fired shots at the pictures. Others tried to collect the pictures, always unsuccessfully, by chipping them off. The first law protecting the paintings was passed in 1911, but enforcement is difficult. People still scrawl graffiti across them.

A concluding note clarifies our use of the term “Bushman”. For long the usual name, it fell into disrepute as being mildly disparaging, implying a country yokel. San seems appropriately Sanitised, but originates with those Khoikhoi people who are not hunter-gatherers. It actually means “those who own nothing”, and really is an insult. Real Bushmen prefer to be referred to as such.