January 26-27 was the wettest Cavern birding weekend ever. A near-whole day of continuous rain was disastrous for swifts. Normally they land only at their nest site, which always has an elevated position. Then to take off is no more than dropping into open space, wings open, third gear engaged. Swifts don’t have first or second gear like other birds; their legs are so short, and wings so long that a jump-start from the ground is impossible. So, it was with dismay we found wet and tired birds on the ground. They had no hope of taking off, so we dried and warmed them before tossing them into the air and hoping for the best. It’s possible that our breeding White-rumped Swifts have had a severe setback. Since it’s presumed that they and their offspring return to the same breeding place each year, we might see a reduced population for several years yet. Common Swifts – non-breeding migrants from Europe, also suffered, but not being tied to a nest site some, at least, could fly far enough to escape the worst of the rain. 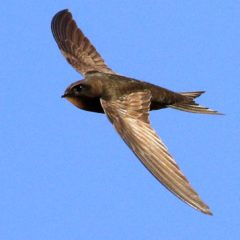 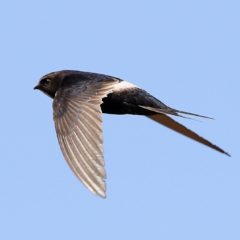 Most other birds are little affected by rain. One morning we saw four different kingfishers – Malachite, Half-collared, Brown-hooded, Giant – before breakfast. Plenty of flycatchers too; Paradise, Fiscal and Dusky – including very spotty newly fledged juveniles.

The Cavern garden is well known for the frequent appearance of forest species that “never” venture into the open. Chorister Robin-Chats are now regular “lawn” birds, outnumbering Cape Robin-Chats there. Lemon Doves elsewhere are always confined to the gloomy floor of the forest interior, but here increasingly pick over lawn fringes. A major attraction in the garden at the moment is the big Kiggelaria tree near the bar. It’s dripping with fruit, a magnet for African Olive-Pigeons which are rarely seen otherwise. 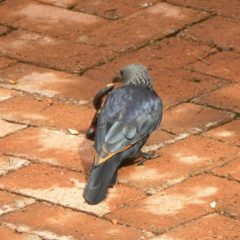 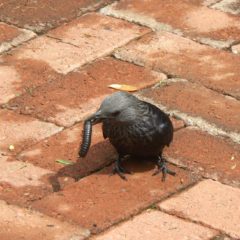 Often common birds get little attention. This is a mistake because sometimes interesting events can be seen at close range. A Red-winged Starling picked up a large millipede in the car park. Millipedes are famously horrid to eat, exuding a vile oil when threatened. They are also too big to swallow in one go. Not deterred, the starling whacked it repeatedly on hard ground, and eventually the millipede broke in half. Now one half was treated in the same way until a small section broke off; down the hatch. Then more whacking until the last piece was small enough to swallow.