GRADE: B
TIME: 6 hours hiking plus 4 hours driving.
DISTANCE: 6-8 km plus 240 km drive.
Steep at times but on a reasonable path. Narrow ledges to cross with a two chain ladders to climb to reach the summit. Need a head for heights.

To spend the day on the summit of the Amphitheatre, in the KwaZulu-Natal Drakensberg, must surely be one of the highlights of visiting South Africa. The Cavern provides a trained guide with packed lunches to sustain this spectacular day outing. Even if one is not so fit, the first kilometre of the walk provides the most breathtaking views in South Africa – fantastic reward for very little effort. 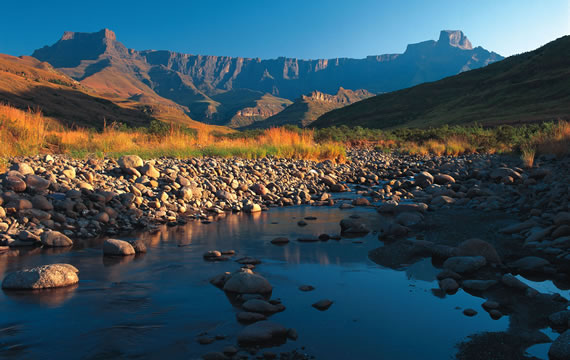 The Amphitheatre is located at the northern end of the Drakensberg escarpment. Driving from The Cavern follow the R74 towards Harrismith up the Oliviershoek Pass to the Free State. Sterkfontein Dam, with several view-sites and a Cape vulture restaurant, is on the left of the road, with the “Platberg” mountain in the distance behind Harrismith. About 30 km from the Oliviershoek Pass the R74 meets the R712. Turn left towards the town of Phuthadijhaba. The Amphitheatre, Sentinel and Witsieshoek Resort are clearly marked. Passing through the town one is led onto a dirt road and into the National Park. The only way forward is up, past all signs of habitation, towards the Sentinel car park. After 13 km the dirt road ends in a secured car park with 24-hour guard presence.
The Amphitheatre has a dramatic history. Once it lay at the centre of the super-continent Gondwana, when all the southern continents were joined together. Then, 140 million years ago, the greatest lava flow of all time erupted here, solidifying into basalt. This same vulcanism fractured Gondwana, and continental drift carried Antarctica and Australia away, leaving Africa with a brand new coastline only 100 km from the Amphitheatre. Since then erosion has cut back to the Amphitheatre wall, where the last of the Gondwana landscape remains. The “dragon’s teeth” appearance of the Berg from below is due to the differing speeds with which rivers cut back into the Amphitheatre face. The actual top is relatively flat.
For a person of average fitness this must be one of the easiest ways to access the top of the Drakensberg – other than by helicopter. It takes just three hours to reach the summit along reasonably maintained paths – and there is even an alternative route if one is afraid of heights and does not intend to tackle the chain ladders.
The views opened up when walking up the path and from the summit must be some of the greatest in the world. The breathtaking grandeur of the scenery, with the Tugela River plummeting 850 m to the gorge below, creates an unforgettable experience. To the north stand the Beacon Buttress and Sentinel peaks.

From the car park a broad path leads up the looming northern flank of the Sentinel (3165 m). On the left of the path observe the aptly named Witches Peaks. This is a good spot to appreciate the unique wildlife that occurs at this altitude. Overhead soar the Cape vulture – endemic to South Africa – and the bearded vulture – famous for dropping bones from a height to break them on rocks below. Two of the beautiful smaller birds, the sentinel rock-thrush and orange-breasted rockjumper, are unique to high altitude, and easily seen on boulder piles. Lurking near rock crevices look for the Drakensberg crag lizard, a little dragon with an orange belly. Rock hyraxes sun themselves on top of rocks, always with one on sentry duty looking after the others. Striped field-mice scuttle busily in the thicker grass around the rocks. The two antelopes most likely to be seen are also typical of high altitude, the mountain reedbuck and grey rhebuck, both forming small family groups. For flower-lovers the best season is December-February, and, yet again, most of the species are unique to the high Drakensberg.

As the path leads to the base of the Sentinel, peer over the edge to the left and see the Tugela Gorge in the Royal Natal National Park far below. Due east lies the Devil’s Tooth, a completely isolated pinnacle of rock between the Eastern Buttress (3047 m) and the Inner Tower (3044 m). The distance as the vulture flies between the Inner Tower and Beacon Buttress is 4 km. Enjoy this spectacular view before the path follows a contour to the right around the back of the Sentinel and Beacon Buttress (3121 m) to the famous chain ladders. These mildly intimidating structures, two ladders of 40 metres and 20 metres respectively, allows easy access to the Amphitheatre plateau above. Those with faint hearts can ascend and descend via a steep gully between the Sentinel and Beacon Buttress.
From the top of the chain ladders the edge of the escarpment lies 2 km to the east. The youthful Tugela River slips over the escarpment to plummet, in five massive leaps, over 850 metres to the valley gorge below – this is the second-highest waterfall in the world. The best position from which to appreciate the magnificent views is some way to the south of the waterfall itself at the Window Crevice. From the top of the chain ladders follow the path along the stream for 500 m, then turn to the southeast and follow the rising slope to the top of Crow’s Nest ridge and to the edge of the escarpment and the Window Crevice.
Do not stay too long at the Window Crevice. Head north down the ridge to the top of the Tugela Falls for lunch. It’s difficult to convey the fear of being so close to the edge with such a huge drop below. Try not to worry, as the rocks have not moved yet, so sit back and admire the view. In the distance are of the dams and rolling grasslands of KwaZulu-Natal. The source of the Tugela and Orange Rivers lies behind on the Mont-Aux-Sources.
The term Mont-Aux-Sources refers to the hills lying behind the Amphitheatre wall. Its actual peak (3282 m) seems insignificant as it lies some 3 km back against the Maluti Mountains. This area marks the watershed between Lesotho and South Africa, east and west coast. In total five rivers have their sources here. They are the Tugela, which plunges over the Amphitheatre wall; the Bilanjill, which flows into the Tugela just below the escarpment; the Khubedu, which joins the Orange River some 60 km south; the Khubela, joining the Khubedu some 11 km from its source, and the Elands River which flows into the Free State.
After lunch the walk back to the car park should be started by 3:00 pm. One has the choice of descending either by the chain ladders or the Gully between Beacon Buttress and the Sentinel. The Gully is steep and full of small loose rocks, and should not be attempted in wet conditions. The path leads to the Contour Path, and from there back to the car park and The Cavern.
Before you Go!

Hiking in this area demands some preparation. Always wear sound shoes or boots. Be aware that this area is subject to rapid changes of weather in all seasons. Always take waterproof clothing and something warm even if you are roasting in the car park below. It has been known to hail and snow in summer at the high altitude. At this height pay heed to the fact that exercise is more tiring – the air is much thinner – and that one dehydrates much quicker.

There is a small toll road fee and the park entrance fee per person.