The May birding weekend produced 77 birds. Not bad considering that all the summer migrants have departed. Glorious weather helped, but the main attraction at this time of year is the burst of aloe flowers. All the specialised nectar feeders in the area spent all day buzzing among the flowers, chasing each other around, and squabbling over the prime spots. Gurney’s Sugarbirds, being the biggest, ruled the roost. Next in rank were Malachite Sunbirds, nearly all of them males in winter dress. Last came the small fry, Greater Double-collared Sunbirds and a few Amethyst Sunbirds. All inhibitions were lost at this bonanza, and the birds could be watched from arm’s length. 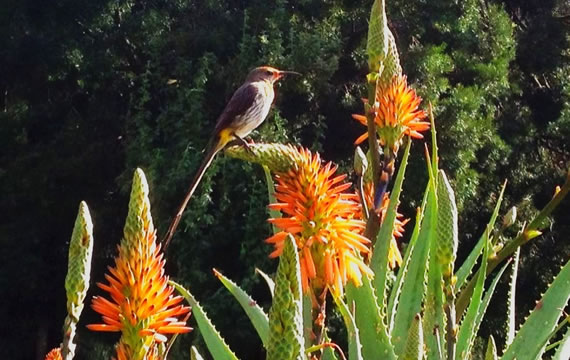 Fairy Flycatchers had already descended from their Drakensberg summit breeding grounds to spend the winter at The Cavern. Normally they wait until the first snow to drive them down. Another local special much in evidence was the Bush Blackcap. At this time of year it emerges from the depths of the forest to find trees with big fruit crops, currently Scolopia mundii and Rhamnus prinoides.

The most exciting event was watching an Olive Thrush dealing with a huge centipede at least 15 cm long. After much whacking the centipede finally gave in. But the really interesting part was that a Chorister Robin-Chat watched the whole proceedings from less than a metre away, presumably hoping to grab any bits of the centipede that broke off.