It’s aloe time again at the Cavern, what a wonderful time to be here. The garden is alive with the fiery orange spires, and the sunbirds and their ilk cannot resist. Gurney’s Sugarbird is a special visitor; there are only two sugarbirds in the whole world and we have them both in South Africa. Gurney’s is found along the eastern berg foothills and goes up into Zimbabwe; from Port Elizabeth south the Cape Sugarbird takes over. The Cape Sugarbird is bigger with a much longer tail and Kirstenbosch is a great place to see them. Although it is not breeding season, the Gurney’s Sugarbirds get very possessive about an aloe clump and chase all-comers away, chattering loudly all the time. 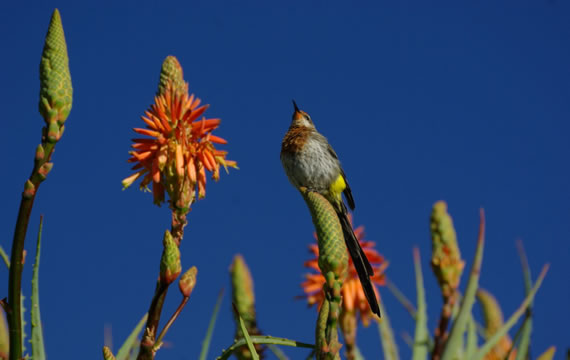 The gorgeous Malachite Sunbird is another aloe-time visitor. In winter dress the brilliant green that gives this bird its name is restricted to the wings and the rest of the feathers are a soft yellow, the female colour. The males retain the extremely long central tail feather so even in winter we can tell the boys from the girls. Although nectar is an important part of their diet, a tasty morsel flying past is soon captured with much aerial skill. I witnessed the demise of a large moth, caught with great finesse and then bashed about against the twig the bird was sitting on. I thought at first the sunbird was trying to dislodge the moth’s wings, but perhaps it was just trying to get rid of the powdery scales on the wings, as the moth was swallowed with wings intact, but only after a good bashing. The jewel-like male Greater Double-collared Sunbirds finished the picture, flitting from floret to floret showing off their scarlet chests and iridescent green shoulders, so small by comparison that the bully sugarbirds don’t seem to worry about them.

Now that the breeding season is over, the Cape White-eyes change to a largely vegetarian diet and are able to gather together into quite large flocks. If you are eating abundant fruit, you don’t need to protect it for yourself alone, but can share with all your friends. Then, when that source is finished, you can all move on together to enjoy the next fruity offering. Of course a juicy insect will always be the number one choice if found.

Some five or six years ago I mentioned that Cape White-eyes from the southern Cape differed in that their bellies were grey, unlike ours where the belly is yellow. In a very dry spell many of these grey-bellied birds moved upwards and eastwards to more favourable hunting grounds. But some of them did not bother to make the journey back again and over the past few years I have noticed quite a few of our white-eyes sporting grey bellies. The two colour forms seem to mix quite happily and I wonder now whether they are actually interbreeding, or whether the grey-bellied ones will seek out a grey-bellied mate and ditto for the yellow-bellied ones.