It’s Aloe time, and this year the Aloe arborescens around the balcony are better than ever. This has to be the place to see Gurney’s Sugarbird in their dozens, some of them at arm’s length, and singing a lovely rippling song. Lots of aerial dogfights, one wonders why in the midst of plenty. Just as abundant were Greater Double-collared Sunbirds and, half in winter dress, Malachite sunbirds.

Surprisingly many other, apparently unspecialised birds were attending the flowers too. Lots of Masked Weavers and Dark-capped Bulbuls jousted with the sunbirds. It used to be thought that these were pirates – not the ones brandishing cutlasses and demanding pieces of eight – that pierced the base of the flower to get at the nectar while bypassing the pollen. But check the picture of the bulbul with pollen all over its face. 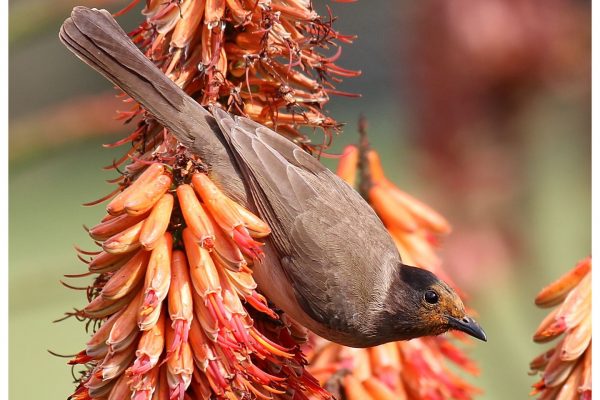 Altitudinal migration has begun – we noted Rock Martins for the first time this year. These breed higher in the Berg, descending below the Little Berg about now.

Things were otherwise fairly quiet in terms of numbers, several of the more unobtrusive species showed themselves. The Bush Blackcap, including a juvenile that must have been reared here, visited the garden, as did the Drakensberg Prinia. This is our “most endemic” – if there is such an expression – bird, normally confined to dense long grass.

On our grassland walk we did well with LBJs. Best were a Long-billed Pipit and a Wailing Cisticola, both perched obligingly close.

A nice bonus was seeing eight Eland contentedly munching shrubs. Also a Caracal poop along the path: just the poop, not its owner.