Miserable weather when it mattered most limited the birding somewhat. But the influx of tropical migrants has begun. They don’t all arrive at once, and as usual the Greater Striped Swallows were first. One more heavy rain is needed to provide them with the soft mud needed to start repairing old nests and building new ones. The nest that has been used for several years is easily visible underneath the balcony surrounding the big yellowwood tree. Nowadays nearly all GSS nests are on man-made structures, suggesting that in the old days the species was probably much rarer. 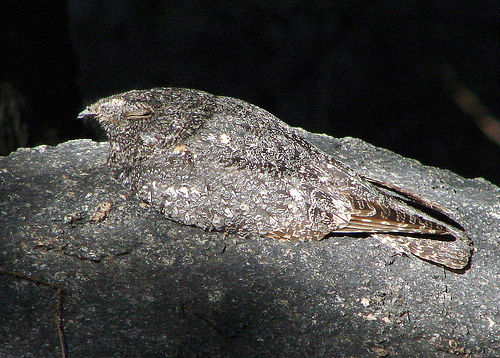 Spring has certainly sprung for the Dusky Flycatcher. One bird was begging, as newly fledged chicks do to parents, to another flouncing around on the same branch. But females of many species often go into juvenile mode during courtship, and so it was here. In a flash the second bird mounted, and a few flutters and a second later it was all over.

There are birds that are “only” found in the forest that sometimes turn up in unexpected places. The Olive Woodpecker is an example. The latest sighting was of one checking the dried dead leaves of aloes just outside the conference room. There’s nothing easy to hold on to, and surely little edible to find it’s a niche opportunity that no other bird bothers with.

The highlight was hearing the Freckled Nightjar call over the main lawn. Many people will be familiar, at least with the call, of its cousin the common and widespread Fiery-necked Nightjar. But the Freckled is not easily found, living as it does on rocky hillsides, usually dozing on the rocks. So the average walker sticking to a path will never flush one. The Freckled call is a strong, fluty, whistled “wow-wow”, sometimes repeated. The only other evidence we have of the Freckled at the Cavern is a dead bird found on the road some years ago.