GRADE: D
TIME: 4 hours.
DISTANCE: 8 km.
TERRAIN: Undulating path with moderate slopes and gradients. The descent to the Silent Woman is steep but not difficult.

Follow the path from behind Room 203 (at the diesel pump) and bear left. Go up three metres and into the Fern Forest. Follow this path through the bush tunnel until you reach a wooden bridge over the river. Cross the bridge and turn immediately left ascending into the forest. On reaching a large cairn turn right.

The path ascends steeply coming out into the open on Bushbuck Ridge. To your right you will have views of The Cavern and the Resort Spa. After passing though the kissing gate continue straight ignoring the turn to the right signposted “Natural Pool”. The path now descends through another gate and down onto the gravel track. Turn left onto the gravel track, crossing the bridge. Immediately after the bridge the path veers left up the side of the hill bringing you back onto the road before the gate.

About 125 metres beyond the gate, take a right. This track will take you on a contour around the front and below the camp. Approximately 700m down the track, you will cross a stream, where the track takes a 90 degree right bend. From here, continue about 50m, and look for a path that branches off to the right, which goes steeply down into the valley. As you go into the trees, you will find a campfire. Look at the rock face on your right to see a red square and a white arrow. This is where the rock carving of the Silent Woman is to be found.

The Silent Woman was carved by Willie Chalmers, who arrived in the area in the 1950s. He was a pacifist who did not wish to fight in the Second World War. He had walked from the Cape to Natal where he intended to study Bushman art. He started carving instead, often at frenetic speed, sometimes for long periods without rest. He kept no records, so not all his sculptures are known. Every so often a new one is found. Willie Chalmers also painted, and some of his work hangs in the Conference Room. 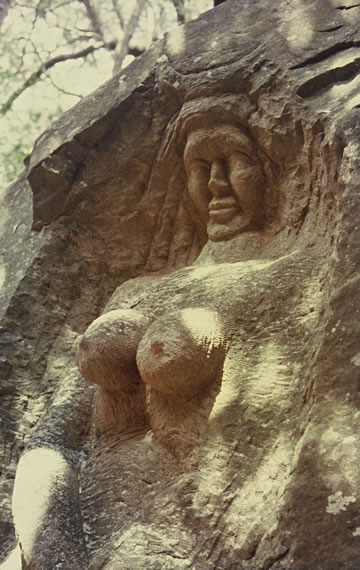 To return, follow the path back to the jeep track, which will lead you back to the gate before Sungubala Camp. Go through this gate and continue on the jeep track until reaching the tarred road. Turn right, back to The Cavern.