Winter has definitely arrived. The best possible proof is the appearance of the Fairy Flycatcher, our famous altitudinal migrant from the top of the Berg. Two were dashing about in newly regenerating forest just below the swimming pool. Although always called a flycatcher this is a bit misleading because its behaviour always suggests a warbler, and a busy one at that.

Keeping it company was a Yellow-throated Woodland Warbler and two Cape Batises. Both these species are usually confined to real forest, but at The Cavern natural regrowth in quiet corners is good enough for many forest dwellers. An association of different species like this is not unusual, and indeed is often more extensive in natural forests. The principle is that different species do not operate in exactly the same way, so do not compete, but the general disturbance created by the crowd causes insects to move, making them more vulnerable to whichever bird is nearest.

Another very high spot was a Black Cuckoo-Shrike in much the same place. This is an uncommon species in the lowlands, and virtually unknown at this altitude. Both the Half-collared and Giant Kingfishers were in the garden dams.

Three Jackal Buzzards gave a rare display together. One was a full adult, another was a sub-adult – perhaps two years old to judge from the plumage – the third a yearling in brownish dress. After a few minutes circling fairly close, the two older birds linked talons and whirled at full speed, falling vertically. This performance is sometimes given by other raptors – Verreaux’s and Fish Eagles for example – and used to be an element of courtship. Now it’s known to be aggression; here the presumably resident adult was seeing off a potential rival. The brown yearling would not be a threat; perhaps it was just a curious onlooker. 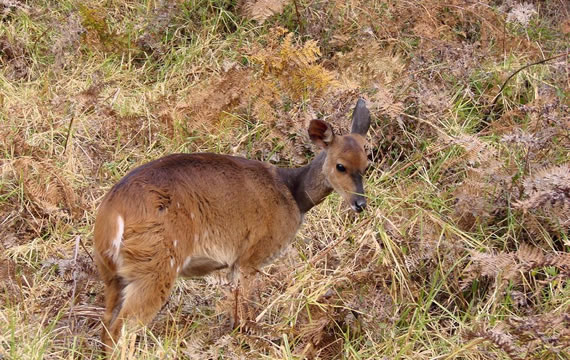 Bushbuck were up to their favourite occupation in the garden – eating roses. Up on the hills five Eland graced us with their presence.