There’s no such thing as a dud birding weekend at the Cavern, and last weekend was no exception. Birding walks always start on the front lawn, under the Kiggelaria africana (that’s the Wild Peach tree), which is dripping with ripe fruit at the moment. The ripe fruit splits open to reveal a number of bright orange seeds, small enough to be eaten by white-eyes and yet satisfying enough for the much larger African Olive-Pigeons. Then there are the little black caterpillars of the Acraea horta butterfly that devour the leaves and are, in turn, eaten avidly by all manner of cuckoos. It was hard to get the group to leave the lawn; such was the variety of birds right there above us. 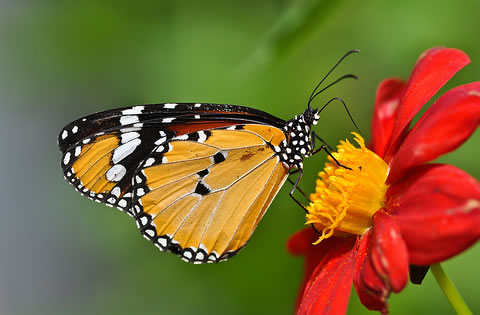 The Cavern garden merges so seamlessly with the natural forest that many so-called forest birds are quite at home in the garden. Southern Double-collared Sunbirds are usually found inside the forest, but here at the Cavern they happily mix with their Greater Double-collared cousins. A shorter beak and much narrower red chest band separate them from the Greater Double-collared Sunbird – we were lucky enough to see them side-by-side. We found Bar-throated Apalis, Chorister Robin-Chat and Forest Canary on our pre-breakfast garden walk, with the tiny Yellow-throated Woodland-Warbler the highlight of this early-morning outing. Weighing around 7 grams this adorable little bird was a Lifer for some and a delight for us all.

The Red-chested Cuckoo or Piet-my-vrou is a bird often heard and seldom seen, but our lucky gang had wonderful clear views of this enigmatic bird. They are not calling quite as incessantly as they do earlier in the season. Maybe they realise that their hosts are nearing the end of their breeding season? We saw one juvenile, still without his red chest, being fed by an exhausted looking Cape Robin-Chat. It seems almost inconceivable that such a small foster parent can raise such a large child; the robin must need a good holiday after that feat!