The weather was unusually hot, not ideal for birding. But why do birds respond so quickly to a very early hot morning, and more or less slacken off even after a couple of hours?

Temperature is indeed the main factor. All small birds wake up hungry, but insect food isn’t always obvious first thing. Being cold-blooded, insects hardly move until warmed by the sun. Only then are they easier to find – insectivorous birds respond mostly to movement. After a big breakfast birds do what we humans would – slow down and look for shade.

But of course there’s always something to see. The White-rumped Swifts and Greater Striped Swallows made a marvellous swirling overhead display first thing. Once the ground warms up, the air above it rises, taking flying insects with it. Swifts and swallows must follow, and by 8 o’clock most were high out of sight. 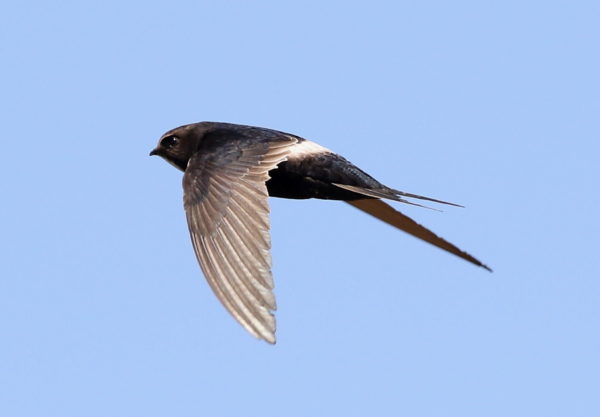 Tropical migrants have arrived; both Red-chested and Black Cuckoos were calling. Paradise Flycatchers were busy. Remember that it’s the brilliance of the head and eye-ring colour that identifies males. Tail length is hugely variable – in the present case enabling at least four separate individuals to be identified. The “lack” of females probably means that they were on nest duty.

A real highlight was seeing three Ground Hornbills foraging. The local group is known to number four – perhaps one is minding the nest? A pair of Secretary Birds circled over the hotel grounds.

There has been a dry spring, and some of the small streams near The Cavern have stopped flowing. One result is that the water level in the garden dams is unusually low. Kingfishers are making the best of this. Malachite Kingfishers were always present, and a Half-collared Kingfisher caught quite a large fish right in front of our assembled company. Too big to swallow we thought. No, down it went. Birds (as can snakes) can swallow huge meals without choking because the food pipe is entirely separate from the wind pipe, and they can breathe and eat at the same time. We humans have a dangerous crossroads in our pipes – don’t talk with your mouth full.