Four years ago when Big5Hike was born we were 20 hikers and many paying guests staying at The Cavern. That year we raised R103,000 in recognition of Megan’s late grandmother Ruth’s 103rd birthday. I distinctly remember us all sitting outside the cave bar drinking Flying Fish (as this was all we could get for free) and Sharon saying, “Next year let’s all bring a friend!” And so then we were 65, with a few corporate sponsors and better beer, and Hilton was still confident he’d break even for the weekend. Last year we were 90 and he said the mountain can’t take any more……so Megan and I created “the Little 5.” This year i am extremely proud to announce that there is not one fully paying guest staying at The Cavern! 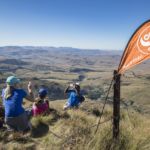 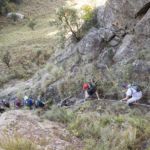 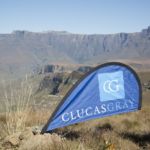 Megan and I would like to welcome all you returning suckers – Rob, Sparky; I didn’t think we’d see you on the mountain again! Also a special welcome to all our first timers and especially our little people of whom we have 30 this year! I’m particularly sensitive to those of you with big families – the Leslie’s who are sponsoring their 5 kids (I guess that’s what happens when you live on a farm in the middle of nowhere!), The Watt Pringles who have not only provided us with our M&B station, our Sparkles sweets & treats and our awesome Wimpy burgers but who also walked the Big and Little 5 with their three kids today. To the Woodlands and their three little ones, the Bedinghams and the entire Montusi crowd whose pain is still to come! Also a special welcome to Brett Bishop who has chosen to celebrate his 50th birthday by doing Big5 and who together with 12 friends has raised R72,000. When Big5hike first started we used to call and harass Brett for sponsorship the Thursday or Friday before so now he’s chosen just to come voluntarily! 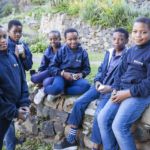 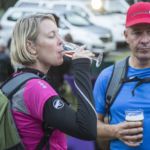 I also want to especially mention some of you who have made a particularly significant contribution. I know Graham said I am not to mention him and my family says one must be humble, but some things just need to be said. My poor unsuspecting family and their colleagues who have collectively raised over R200,000 this year. Graham Baillie and all the people who have followed his call to join our little cause and who is both directly and indirectly responsible for another R200,000. To Total South Africa and all our peak and cave sponsors. Last year we only sold three of our 5 peaks. This year we have been truly blessed to have sold all 5 peaks as well as Cannibal Cavern. Welcome Hollard, Dezzo Roofing, Out in Africa, ClucasGray, Mooney Ford and Ince. Your generosity, enthusiasm and willingness to be a part of this intimate gathering supporting a small school in the rural Northern Drakensberg and all for a tiny flag and a few hours of publicity is truly amazing. 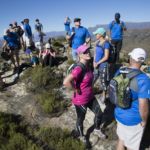 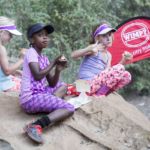 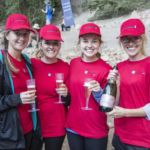 When I phoned Paul and James Clucas to ask if they would double their sponsorship from last year I commented that the inflation rate of Big5 appeared to be well in excess of the South African economy. Look on the bright side James, let’s hope it stays that way! 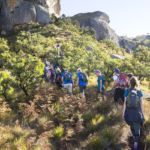 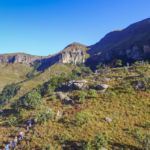 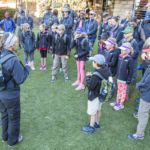 For me Big5Hike is about heart. It is about the opportunity to be helped and to help another. It is about contributing to an awesome cause that provides a basic introductory education to people who would never otherwise have such an opportunity. Not only do Megan, Sue and the teachers provide an excellent foundation to these kids but we have recently had one graduate go onto become dux of school, one skip a year and a third about to embark on his first international tour to Japan at the Drakensberg Choir School. 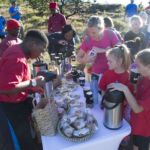 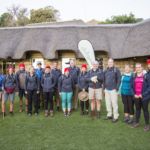 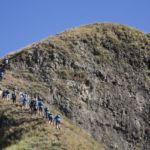 Big5hike is about the Bedingham and Carte families who have built and preserved this amazing resort over three generations. It is also about the magnificent mountain peaks we summited today. For when all else around us is crumbling, we are reminded of the beauty of these mountains, the magnificence of their size and the stability of their permanence. 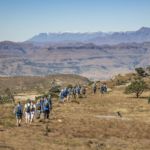 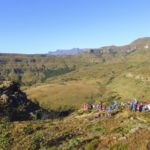 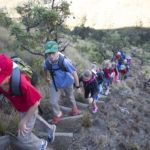 Simon and I were lucky enough to have joined the Carte and Bedingham families on a hike of the Amphitheatre to celebrate Les’s 40th and Peter’s 70th birthdays. On one occasion when we had stopped for a rest Peter beckoned us to join him in search of “the kitchen” where a guide had once cooked him a meal on a particularly windy night on a hike many, many years ago. I was the only gullible fool! As we stumbled over rocks the view became increasingly more spectacular until Peter turned to me chuckling as he does and said “Shit I can’t stop looking at the view but then I don’t know where the bloody hell my feet are going!”

While “the kitchen” proved a bit disappointing being nothing more than a slightly flatter and slightly bigger rock than the hundreds of others around us, as we rounded the corner we came upon the most incredible view of the Needle that would have been hidden to the others. Once again Peter turned to me and said “Shit, I wish the others had come!”

What I want to share with you is not how much Peter swears but rather his love of these mountains, his tireless energy and constant curiosity for life and his passion for sharing it with those around him. He is an inspiration through the man that he is and through the school that he built 10 years ago and I would like to dedicate this Big5hike to him. 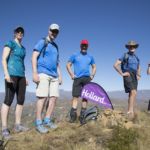 For on that day, through his words and his example, I was reminded to not get so caught up in watching where my feet are going that I forget to look at the view. To follow inspiring people even if you don’t know where they are going and to always remain curious as to what lies around the next corner and to the wonders of life and especially nature.

So in closing I want to say, stop and admire the view every once and a while, keep challenging yourselves physically as physical hardship builds courage and courage overcomes fear, and lastly if you haven’t needed help in the past week, make something up. For it is in helping others and mostly in being helped that the magnificence of our humanity is revealed.