Words and photography by Laurence Mitchell

The landscape is unexpectedly green, a folded blanket of lush slopes that extend to vertiginous cliffs in the west. Pockets of dense woodland lie in the deep folds of the valleys, but the eye is inevitably drawn upwards to the improbably steep, flat-topped peaks that mark the summits. This is the Drakensberg range of South Africa, part of a long mountain chain that hugs the border with landlocked Lesotho and stretches from Eastern Cape to the country’s northernmost provinces. Drakensberg derives from the Afrikaans for ‘Dragon Mountains’ but given the numerous peaks that rise abruptly to more than 3,000 metres, its Zulu name of uKhahlamba (‘barrier of upturned spears’) seems somehow more appropriate. 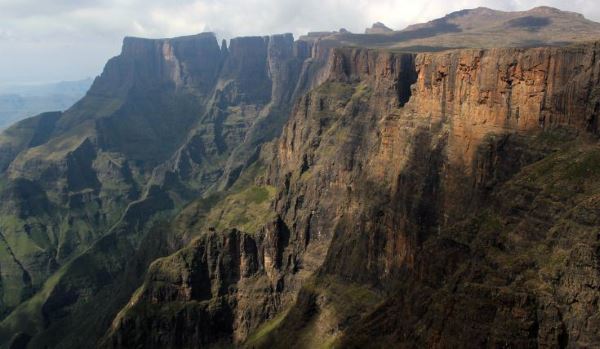 The uKhahlamba-Drakensberg Park in KwaZulu-Natal province is a World Heritage Site, but we have come here primarily to walk. Our base for the first week is the Cathedral Peak Hotel, an idyllically situated and well-appointed hotel in the central part of the Drakensberg range. The first morning’s outing is a relatively gentle affair, a walk to the Doreen Falls that are located in a leafy glade only an hour from the hotel. The falls are a delight but even better are the San rock paintings that we see at Lower Mushroom Rock, a short climb uphill from the waterfall. The San were a hunter-gatherer people who occupied the region before incoming Zulu settlers drove them out. They were accomplished artists and these are some of the best surviving examples of their work. Our guide Absalom tells us how the paintings were created using pigments of crushed minerals and brushes of animal hair, and explains that their excellent state of preservation is down to their permanently shaded, south-facing location. The vivid paintings portray a variety of scenes from San daily life. One shows hunters pursuing a group of eland antelopes (‘Look!’ says Absalom, ‘The man at the back has short legs like me’), while another depicts men running away from a lion, one of whom, dripping blood, has clearly been injured by the animal. Lions are now absent from the Drakensberg region but eland remain numerous and we have already seen a few in the distance on our way up to the rock.

A couple of days later we set out for another Mushroom Rock, although this one is a much tougher climb and really does resemble a fungus. The rock is the first of several objectives in a long day’s walk that follows a horseshoe ridge route. Along the way we climb a smoothly curved hill called Tarn Hill, so-named because of a shallow lake at its base, and the quaintly-named Tryme Hill, which really does try a few of us in the group. The day is hot and sunny and there is little shade to be had as there are no trees on the slopes, just protea bushes, the national plant of South Africa. Although it is now late in the season, a few protea are still in flower with large succulent blooms. ‘Baboons really like to eat these flowers,’ Absalom informs us, which perhaps partially explains the large number of these apes we see in the vicinity.

Despite the heat the rewards are plentiful, with rousing views at every turn and a chance close encounter with a large herd of eland that eye us nervously. As anticipated, the hardest part of the walk is the steep climb down from the high ridge of Tryme Hill, a slow descent on a rock-strewn path that eventually reaches the main track back to the hotel.

Our second week is spent based at a resort in the northern Drakensberg just outside the limit of the Royal Natal National Park. The Cavern Berg Resort is situated at the head of a luxuriant valley with a number of enticing walking options right on its doorstep. The birdlife in the extensive wooded grounds here is, if anything, even more abundant than it had been at the Cathedral Peak Hotel: iridescent sunbirds sip nectar from the flowering plants on the terrace, rock thrushes bounce along the neatly thatched roofs of the cottages and red-winged starlings dart between the treetops.

On the first full day of our stay here we hike up to a rock feature called Camel’s Hump, a name that makes perfect sense when it is viewed from a particular angle. Our new guide Mike is very knowledgeable about local fauna, naming each bird that we see as we climb uphill away from the resort. His knowledge of plants is equally impressive. ‘This bush with the orange flowers we call “wild dagga” because they say that the San people used to smoke it to get high’. The plant, an attractive bush with honeysuckle-like flowers, looks innocent enough. Elsewhere, growing wild, are plants more familiar to British gardeners: hibiscus, buddleia and daisy-like everlasting flowers. With first-hand knowledge of how tough local village life can be, Mike tells us a little about Zulu culture too. ‘If you want to marry a girl then you need to buy 11 cattle for her family. Each cow costs four or five thousand rand (around £200) and so young men like me have to work very hard and save up for many years to get married.’

After a steep climb we stop off at Cannibal Cavern, a deep overhang in the cliffs that takes its name from a legend about some ill-fated people who sheltered here whilst fleeing the forces of the Zulu king Shaka. The route continues more or less on the level along Surprise Ridge, from where the summit of Camel’s Hump is reached by an easy rock scramble. We arrive at the perfect time for a lunch break and enjoy our packed meal gazing out from this impressive vantage point, the partially cloud-obscured cliff wall of The Amphitheatre dominating the western horizon and the flat plain of the KwaZulu-Natal veldt stretching away to vanishing point in the east. The Amphitheatre, a highly impressive curving barrier of 3,000-metre-high basalt cliffs, was to be our walking target in a few days time and we could only hope that visibility would improve by the time we got there. Thankfully, as the weather became warmer over the next few days the skies cleared.

If The Amphitheatre comes with high expectations, it does not disappoint. Despite its relative proximity as the crow – or vulture – flies, to reach the trailhead beneath Sentinel Rock (3,166 metres) it is necessary to make a pre-dawn start from the hotel in order to start walking reasonably early. Our circuitous two-and-a-half hour road journey passes through part of Free State province and the former Basotho ‘homeland’ of QwaQwa along the way, a taste of the hard reality of everyday life for many in South Africa. The final stretch within the Royal Natal National Park is by means of a bumpy mountain track, and just before arriving at the 2,600 metre-high car park one of us spots a lammergeier perched on a roadside boulder. To catch an unexpected glimpse of a rare bird like a lammergeier, a wedge-tailed vulture that specialises in breaking animal bones by dropping them on rocks, seems an excellent portent for the day ahead.

It is, indeed, a good day for wildlife. Ascending the contour path beneath the summit of Sentinel Peak we encounter several dassie (the Cape hyrax or rock badger) lazing in the sunshine. We also spot a skittish group of mountain reedbuck before seeing five more lammergeier soaring high with a single jackal buzzard for company. The birds are distant, little more than black and white specks in the sky despite their three-metre wingspan, but we feel privileged to be rewarded with such a view knowing that the Drakensberg region is these vultures’ only outpost in all southern Africa.

The path zigzags sharply uphill, eventually reaching a gap in the long cliff wall. Two routes lead to the high plateau: the first involves scrambling precariously up a gulley, while the second, our preferred option, requires climbing up metal chain ladders fixed to the cliff face. While such a route might not hold much appeal for anyone lacking a head for heights, everyone in our party manages to find the wherewithal to climb the ladders without too much difficulty.

From the top, a path leads along the plateau through a landscape reminiscent of northern Scottish bog country. Soon we reach the top of Tugela Falls, a waterfall that has a total drop of 947 metres and is said to be the second highest in the world. Peering nervously over the edge it is easy to believe such a claim.

Eating lunch and resting aching legs on the rocky ledge close to the waterfall, far above the silvery thread of the Tugela River and the gorge where our group had been boulder jumping just a week earlier, we are privy to what must be the finest of all possible vistas in the Drakensberg. Half an hour later, rested and somewhat dizzied by the view, we set off back along the same route. Somehow the cliff ladders seem just that much easier going down.