The ground hornbill is the largest of all African hornbills. It is a huge black bird with a bright red face; in flight large white wing panels are obvious. As the name suggests, it spends most of its time graciously strolling around. Unlike other hornbills it is entirely carnivorous, eating large insects and other invertebrates, frogs, lizards, snakes and even small tortoises. If a hornbill is seen collecting food, as opposed to eating it on the spot, it is a sure sign that there is a nest nearby, with a chick to be fed. The nest might be in a large hollow tree, but in the Berg a more likely spot will be a cave in a cliff, or a cavity in a pile of rocks. 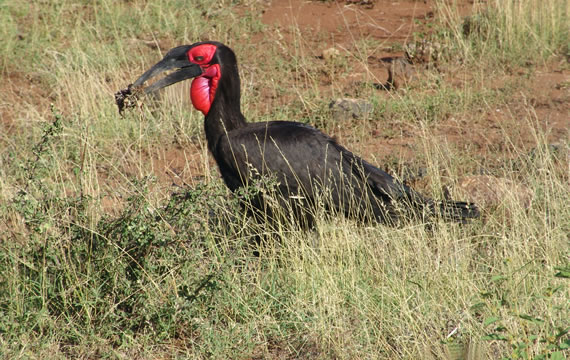 The ground hornbill associates into family groups of at least three individuals, sometimes as many as eleven, with a huge territory of about 100 square kilometres. The Cavern family currently numbers four, all adults, and is now (October 2012) in residence. This is not always the case because the Cavern lands are only part of the family territory.

This bird has a remarkable social life. It is a cooperative breeder, not as saucy as it sounds, meaning that only the eldest male and eldest female breed, all the others being helpers. The phenomenon is not unique, being seen in quite a few tropical birds, but is carried to the extreme in the ground hornbill. A family must number at least three to be able to raise a chick. Once the chick, easily identified by its grey-yellow face, has fledged it accompanies the family, but still has to be fed by the others for its first year. It can feed itself in the second year, and after that can find extra food to give to the next chick. Maturity comes at six years, but breeding comes very much later. 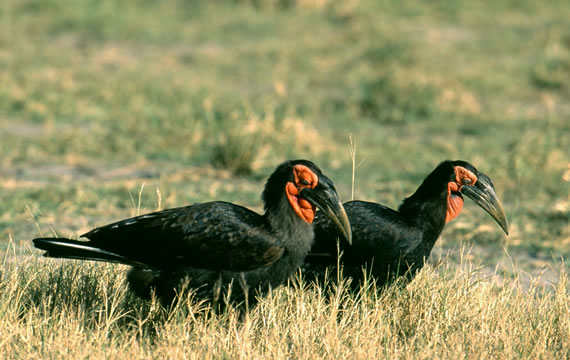 If all goes well the family grows. If the king dies his place is taken by the oldest remaining male. Ditto the queen. So the helpers, if their patience lasts long enough, can aspire to the throne. But this could take time because the average life expectancy of the ground hornbill is over 40, with a maximum, although unproved, of at least 80. And all birds remain fertile until old age, so there are no abdications.

There is a lifeline in a large family. Two or more of the surplus of one sex will leave the family to look for similarly frustrated mates from a neighbouring territory. A bit like Seven Brides for Seven Brothers. In the new association the formalities are brief; the oldest boy gets the oldest girl, with everybody knowing their places. Now we see how subsequent incest is largely avoided. A widowed queen gets her husband’s brother, and so on. By the time all the original family has died the rest are cousins of varying distance.