About 2000 eland roam the Drakensberg and its foothills. Roam is the correct word, which is why we don’t see them at The Cavern every day. Summer tends to be spent grazing in the higher berg while the grass is at its most edible. Individuals congregate in breeding herds, maybe 50-strong. In winter the herds break up as the eland move to the lower berg. Here they browse on small trees, especially Buddleja salviifolia. They are messy feeders, leaving a trail of wreckage behind them. 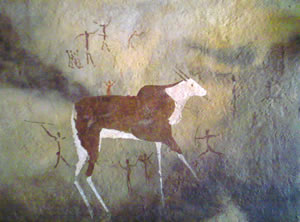 The eland is the berg animal. No better proof is needed than the Bushman paintings, more than half of which portray eland. It is the biggest animal here, and indeed the biggest antelope anywhere. Imposing and elegant, its great dewlap conveys an air of opulence too. Despite this, the eland is an athlete, easily jumping over a two-metre fence, or right across a district road from a standing start. When walking, eland make loud clicks, sometimes likened to castanets. The sound comes from their front-leg “ankles”, actually foot bones just above the hooves. The significance is unknown. Both sexes bear tightly spiraled horns, those of the males being heavier.

The wide open spaces of the berg suggest that many more eland could live here, yet they never increase. In former times there were many more. The difference was that, before the extensive human settlements in the midlands, many of the large animals migrated seasonally. The Drakensberg grasslands were nutritious enough in summer to support large herds, making the uphill trek worthwhile. Even elephants and lions came. Then, as winter approached, the grasses lost palatability as they transferred their minerals to their roots. This was the signal for most of the herds to return to the lowlands. Now this migration route no longer exists, and the eland population is restricted by what the winter can support.