Top Gate is the starting point. Take the path right, leading past the football field. Keep left, going uphill, where the path forks. The first top dam will be on the left in front of you. The TV aerial is clearly visible on the shoulder of the next level. To pick up the path to it cross the fence just behind second top dam. From the aerial the contour path begins to rise. Look out for Ground Woodpeckers sunning on the rocks. 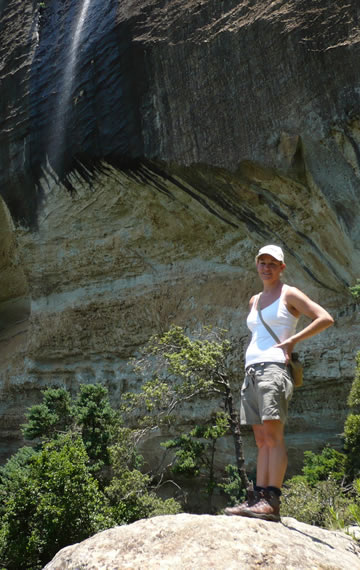 Many of the large boulders are also home to isolated large trees, and even miniature forests. A bare rock may seem an austere home, but has several advantages. First it is a refuge from fire, and nearly all “rock” trees are otherwise found only in the forest where fire rarely penetrates. Second, a rock acts as a heat store, soaking up sunshine by day, and slowly releasing warmth at night, keeping frost at bay. Third, all the rain that falls on it is channelled to one or a few spots – exactly where the trees are rooted. And there is plenty of soil for most of these rocks are not outcrops, but boulders that have rolled down from higher up, and are sitting on a full soil profile. How did the trees get there? Any passing bird perches on the highest available point. In its droppings will be seeds from fruits eaten at a previous pit-stop. The seed will automatically be washed into the best germination spot by the next rain. Once it has matured and begins fruiting it becomes an added attraction for yet more birds to visit. 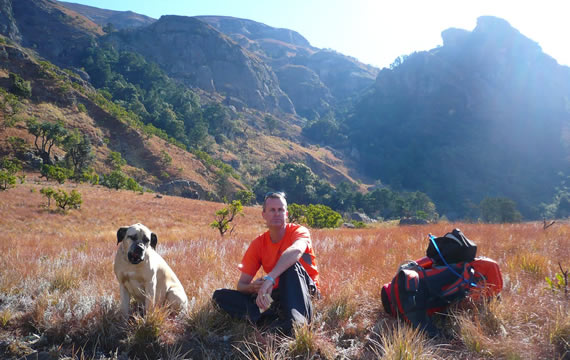 After walking alongside a gate, go through a gate on the right. The path goes through some small forest patches, look out for the rare and endemic berg bamboo. Right beside the path, and quite close to the cave, is a nice specimen (and the only one in the vicinity) of Protea subvestita.

Cannibal Cavern was home to Bushmen in earlier times, and two very faded paintings still exist. Since then it housed real cannibals early in the nineteenth century. During King Shaka’s wars of expansion, refugees from losing tribes fled south and west, often dispossessing even weaker tribes on the way. Cannibal Cavern became the last refuge, where a few survivors could not be persecuted further. They dared not reveal their hiding place, so there were hard times with little food. When starvation set in the only choice was to eat their own dead. This led to their tribal name of Amazizi – amazimo is the Zulu word for cannibal. When the troubles finally ended, they moved down to the flat lands below to resume normal life. Many people working at The Cavern today are seventh generation descendants of the original cannibals.

Since cannibal times the cave has been used to shelter up to 500 cattle, and a stone shepherd’s dwelling has been built near the cave entrance. A permanent trickle of water at the back of the cave made it a tenable home, and provides a welcome drink for walkers today.

Return to the hotel by the same route, or take the longer circular route going via Surprise Ridge.