The weather was drizzly and unsettled, but this did not upset the hardy British Ramblers and a few other keen souls. Highlights:

The Crowned Eagle made its first ever appearance two years ago, and is very unusual at this altitude. But “our” eagles have been seen performing their duet high in the sky since then, and on Saturday a single eagle gave the continuous yelping call as it circled above Fern Forest.

Another rare bird, especially outside the lowlands, is the Black Cuckoo-shrike. It’s presumably named after the female, which is basically yellow with lots of barring, and looks quite like a cuckoo. The male is completely different, jet black, and is easily mistaken for a Drongo or Black Flycatcher. Field guides illustrate it with a small yellow shoulder patch, but few individuals actually show this feature. More diagnostic, but rarely mentioned, is the glimpse of orange at the corner of the gape. The flattish crown of the head is the only other feature of note. The Black Cuckoo-shrike has been seen only twice before at the Cavern, but this male gave a good showing in the acacias beyond the river bridge.

We also had a mystery bird, certainly it did not remotely match any picture in all the field guides. It was sparrow-sized, completely plain smoky brown, slightly paler below, with a bright red beak. The least likely explanation is that it’s a species new to science: better is to assume that it’s a little-known plumage (often of a juvenile) of something common. The snag is a coloured beak – juvenile birds rarely have “sexy” colours. But it turns out to be a young male Pin-tailed Whydah. 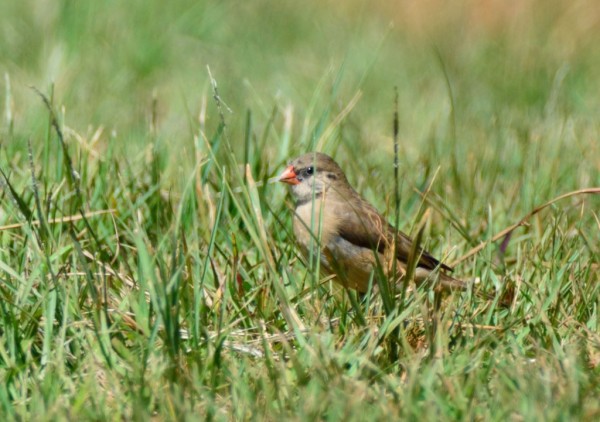 Grand finale was a visit to the Tower of Pizza to see the Amur Falcons come to roost. The season is coming to an end, with “only” about 1000 birds, compared with double that a month ago, but a fine spectacle for our foreign guests who have never seen anything like it before.