The small raptors that perch, often in large numbers, on the telegraph poles and wires on the way to the Berg, are Amur Falcons. Males are almost pure pale grey, females have speckled black on white underparts. They are migrants from their breeding grounds in Siberia. The migration is one of the longest of all, about 11,000 kilometres, passing through India and then across the open ocean to southern Africa. 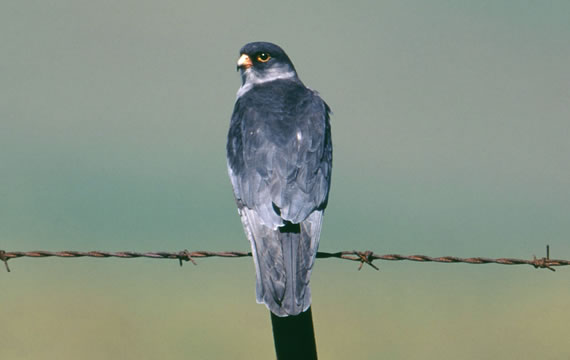 Amur Falcons spend most of the day on a vantage point studying the ground below for food. Grasshoppers are their staple, but, like many other birds, they flock to termites when a breeding swarm emerges from its underground chamber. As each day draws to a close the falcons congregate around a big tree where they will roost overnight. The same site will be used all summer, and often for many years in succession. Before finally settling for the night the falcons swirl together for about half an hour in a spectacular display. One such roost is at the Tower of Pizza, well worth seeing at dusk.