I’m a hiking addict – I simply cannot say no to an invitation to walk in the mountains. So when a friend offered to fly me to the Drakensberg to test walk the 17km Big Five Hike, which she’s persuaded a group of friends to do in order to raise funds for a rural pre-school, I didn’t hesitate. I stayed at The Cavern, a place she calls her ‘church’, an old-fashioned family holiday resort high in the foothills of the Northern Drakensberg, and promised a review of my experience.

In brief, all I can say is: ‘Viva!’ Do it! You’re in for a treat! Each time you embark on a hike, and commit to a getting from A to B in the mountains, you are rewarded – physically, mentally and spiritually. 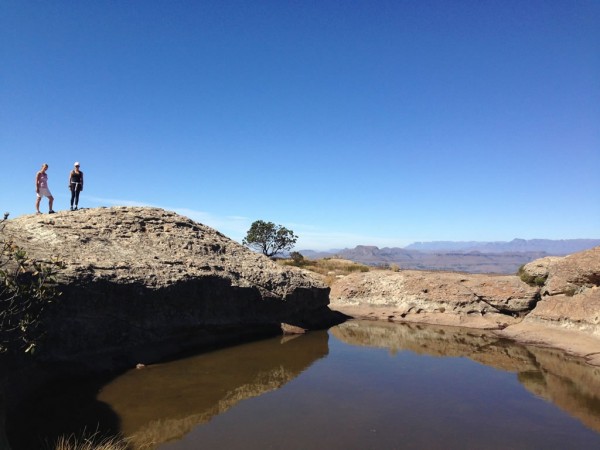 My guide, Sipho Mahlobo, is a 30-something-year-old who’d grown up in these hills and who joined The Cavern straight after school. He’s a well-built gentle person, easy to talk to and easy to be silent with – the perfect walking partner. We started early at 6am to make sure we’d be back safely in the lodge by mid-afternoon when almighty thunderstorms with powerful electric strikes tend to crack down. We were duly rewarded with the pre-dawn tweets of birds in the ancient Yellowwood trees high up in the fern forest, and out on the slopes by the eerie mist slowly being dissolved by the morning sun.

After an hour of a slow and steady incline, Sipho stopped to point out our route – a circular lap summiting five peaks all of which had suddenly opened up through the cloud cover. We paced gently along the path with large Proteas in bloom on either side up towards three globular rocky outcrops, aptly named The Ace of Clubs. Once here we scrambled up Scilla Gulley, thick with slippery growth and oozing moist fertility. I was grateful for my wooden hiking stick, which I used to steady myself up this skinny route over rocks and muddy grooves.

Our first summit was Hlolela, which in Zulu means ‘a kind of beautiful’. Already, what a triumph! I relished the thought of four more of these in just one day. I also spared a thought for those who cannot walk and remembered my time in crutches after breaking a foot, when I couldn’t walk. Here in this huge wide, open space, with the solitude and challenge of a long hike ahead, I could not wish to be anywhere else.

From Hlolela, which stands 2127m high above sea level, it’s a gentle downhill and then a moderate uphill on a ridge through long grass, thick with morning dew, to Battleship, the second summit. Here we found an old rusted fence, strewn about into pieces by years of wind and rain so that the border between KZN and the Free State is just a remnant of barbed wire, just a hint at man’s silly partitioning of this vast natural expanse. I walked a stretch with one foot in each province thinking how absurd our map lines must be in Nature’s eyes and how many battleships were built and destroyed in the mission to extend a boundary. 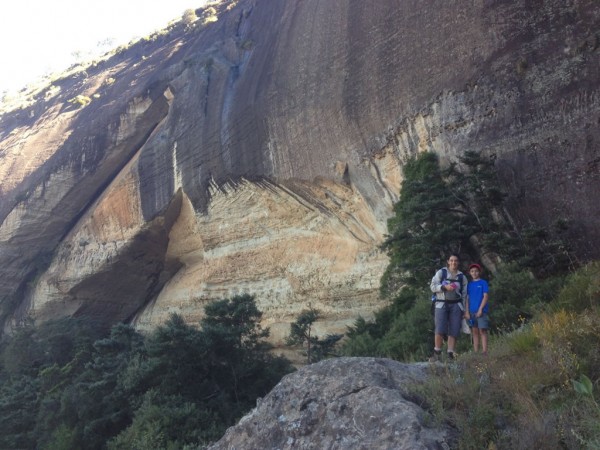 A stretch later, after periods of gentle rain and then no rain, we arrived at a place of strange and interesting beauty. Called Venus Bath, it’s a collection of natural pools, perfectly carved into the smooth rocky surface over thousands of years. The water is cold and immaculate. Here we stopped for breakfast, which is another reason I love hiking so much. Food, be it a simple cheese sandwich or a handful of raw almonds, always tastes great in special places like these.

At the next summit, Sugar Loaf (it looks like grains of sugar have been poured from above into a neat little triangular mound), I could feel my legs were not as strong as they once were. I was glad this was summit three of five already down – more than half way. Yet, the majesty of views, the crisp air, the random sightings of graceful Bushbuck and the sense of traversing large tracts of ground eased me through any physical discomfort. By the time we were almost at the fourth summit of Cold Hill, I received my second wind, wishing that this was a multi-day hike, that we could spend nights up here, cooking meals and tucking up into down sleeping bags only to get more hiking hours into more days. 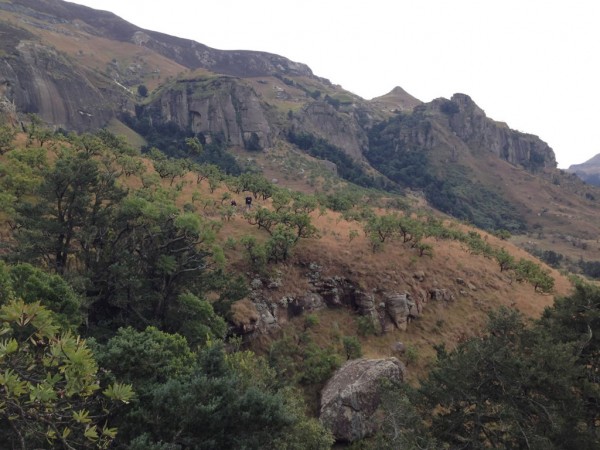 Mist swirled in while at the top of Cold Hill so that I could not see the dramatic wide crest of the Amphitheatre which I knew lay hidden behind the veil of white cloud, but Sipho gaged the skies and said that perhaps by late morning, the sun would have burnt off this cover and we’d indeed see what we know so well from postcards and coffee-table books on the Drakensberg.

We had to carefully negotiate our movements down Devil’s Staircase, which lies tucked beneath Cold Hill. I realized here that walking in shoes too old with tread too smooth was not simply making the most of my kit, but just plain silly. I promised to buy a new pair of boots for my next hike as I slid from one step to the next as if on mini skis down muddied paths, wet and slippery to the touch.

Keen for lunch by this stage (there’s nothing like a fear of twisting an ankle to slow your pace), Sipho and I picked our way gently through the downward scramble that is Cavern Gap. He kept my mind off my hunger by quenching my interest in traditional Zulu culture. He told me about how the Amazizi people were waiting for the late chief’s son to find a wife so that he could become their leader, about how the markings of facial cuts on the cheeks of certain Zulus can tell you which tribe they come from, and about the many medicinal uses of the plant species that we passed.

We entered Cannibal Cave, home to the ancestors of the Amazizi tribe, through a small forest of thick bracken and deep green trees, whose moss-covered branches had twisted and curled around each other in such harmony, it was impossible not to stop and photograph them. Our lunch was long and peaceful – hot tea made from water collected from a drip stream in the crevice of the cave, a chicken-mayo sandwich (one bite took me straight back to my childhood) and a Granny Smith apple, which polished up on my hiking slacks looked and tasted like the best I’d had in years. By the time we’d rested and I’d wrung out my soaking wet socks (those poor shoes were poked in more ways than one), we started off on the homeward stretch. I realized again, rejuvenated and back on the path, that I am happiest when walking in great open natural areas. Already I am planning my return: I hear the bark of a Chacma Baboon and see a clump of one of my favourite plants, the Streptocarpus, growing in full vitality as we make our way up to the crest of Surprise Ridge. By now the skies had partially cleared and through the leftover mist the looming mass of the Sentinel and all the way to the Eastern Buttress of the Amphitheatre was laid out before us. It was a scene of orchestral crescendos… one after the other, deep blues and shades of mauve undulating rhythmically into the distance. 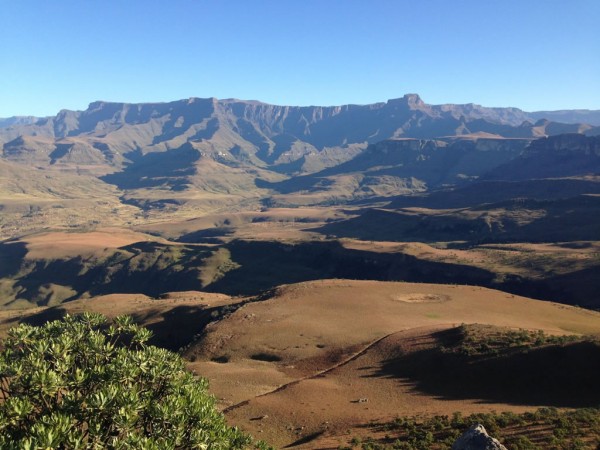 On the fifth summit, Camel’s Hump, we’d walked a magnificent eight hours, not coming across another soul, nor one tiny scrap of litter (other than the ancient ruined boundary fence on the ridge of Battleship). Our hike was almost over and I sensed the urge to ask Sipho for more breaks, just to stretch it out that little bit longer. Standing on the final peak, we had a breathtaking 360-degree view. I felt lucky, grateful and full of wonder. Everything stopped for a moment. It was perfectly silent, and then I became aware that it was not actually silent: There was the gentle wind flapping against my jacket, the drops of rain spraying light blobs of noise onto my daypack, my breathing, Sipho’s footsteps. Yet it was silent enough to find quiet. Somehow the vastness of the Drakensberg lets you look inside yourself, it does something to you as a person, a kind of cleansing that leaves you feeling fresher and lighter.

Strolling down the hill towards the Cavern’s horse stables, with the return of civilization minutes away, I decided to treat myself to an ice-cold beer and an afternoon snooze. That’s the other joy of hiking – coming home and appreciating very simple things all over again. That night as I lay in bed after a tasty meal with Megan Bedingham and her family, who own the Cavern and are hosting the Big Five Hike on 6 June, I realized that not only had I fallen in love again with the rocky peaks and wide gentle valleys of the Berg, I’d also been won over by their mission to raise funds for their primary school.

The following morning I headed in the opposite direction – down the valley to the Royal Drakensberg Primary School. What I saw was exceptional and quite unexpected: A first class operation with quality facilities, passionate teachers, happy little people – both black and white, rich and poor, bright and not so bright – all receiving excellent tuition in a nurturing environment. I pictured the school 50 years on with its solid foundations of beautiful thatched buildings, natural streams, veggie gardens and playgrounds. The children were polite, engaged, cheerful and disciplined. All this, I thought, funded on donations! I walked away imagining what our country could look like by the time these children reached adulthood and realised how much more of this we need in order to build a prosperous and peaceful South Africa.

Megan is hoping to raise R500 000 for this registered independent school, which is run as a Section 18A non-profit organisation. The scholarship fund will help pay for teacher’s salaries, school fees, taxi transport to and from the school for the children of Amazizi and porridge in the morning for those who need it. To see a project like this close down for lack of funds would be a tragedy. And for me, to hike the hills which are its backdrop as a way of raising money is a ‘no-brainer’: You hike, you stay at The Cavern for free and you get to buy a rural child primary education for a year.

Quite simply, it’s the feel-good factor in overdrive.